Of particular concern, StewartBrown says, is that unspent funds are increasing across all package levels.

“From a provider’s perspective unspent funds have a direct effect on the profitability and sustainability of their home care operation,” the report says.

The report also shows the home care providers had a marginal decline in operating performance compared to a year ago, and both revenue per client and staff hours per client continued to decline.

The report notes that the government has implemented the first major change to the home care payment system, with subsidies now being paid in arrears.

From September, the next stage of reform will come into effect and providers will have to claim back the cost of services provided per client at the end of each month.

This will have an effect on provider cash flow management and will have to be monitored, StewartBrown says.

However the changes won’t address why unspent funds continue to balloon, the report says.

It attributes this to individual over-funding,  as opposed to sector wide under-funding which StewartBrown says is a “separate and distinct” issue.

The report is also critical of the final report of the Aged Care Royal Commission for lacking a clear timeframe and pathway for reform, which is says could delay the delivery of a new aged care system and fragment stakeholder goodwill.

StewartBrown says the recommendation for a new integrated aged care program is crucial in getting rid of the silos that have hindered reforms over the last 15 years.

However the aged care funding urgently needs to be increased and “realigned”.

“This cannot wait until the reforms that are driven from the Royal Commission are implemented,” the report says.

In particular, unspent home care funds must be redistributed and extra funding must be provide for more packages.

Providers also need to increase the price of their services to fund the extra staff hours per care recipient that will needed to meet demand.

The analysis, which has removed the direct financial impact of COVID-19, considered data from 45,553 home care packages across Australia. 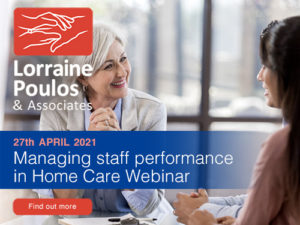 Ditch your Performance Management system! The words ‘Performance Management’ can send shivers down the spine of staff and managers.  All too often, performance management approaches have become awkward conversations, time-consuming and ironically a waste of[...]
May
11
Tue
1:30 pm Your next growth strategy: From ... @ Online
Your next growth strategy: From ... @ Online
May 11 @ 1:30 pm – 4:30 pm

Recognise your expertise in supporting people living at home Over time, your organisation has developed considerable competence, expertise, infrastructure and systems to support people to live independently at home. Your organisation also has an establishing reputation[...]
May
13
Thu
1:00 pm Making Wellness and Reablement Work
Making Wellness and Reablement Work
May 13 @ 1:00 pm – 4:30 pm

De-mystifying Wellness and Reablement Wellness and reablement are important principles of consumer-directed care for all government-funded services. The future model of home care includes a stronger focus and approach on how you work with consumers[...]
May
18
Tue
1:30 pm Royal Commission Impacts: Roadma...
Royal Commission Impacts: Roadma...
May 18 @ 1:30 pm – 4:30 pm

This course has been designed for staff who are working in home care to be prepared and informed about their responsibilities when auditing against ACQS standards. Providers want to be sure that staff in quality[...]
View Calendar
Add
Stories added to your shortlist: