The recent release of funding for thousands of home care packages is failing to put a dint into the waiting list, with more than 100,000 people still waiting for their appropriate level of care.

Government statistics released this week show that 102,081 people are waiting for their approved level of care, compared 103,599 in the previous quarter.

That includes 61,337 without any assistance at all and 40,744 who are making do with a lower level of assistance than they have been assessed for.

The royal commission heard at its final sitting last week that home care is one of the systemic failures of aged care.

Counsel assisting said the announcement earlier this year of funding for 16,105 packages in response to the Royal Commission’s Interim Report was insufficient and the subsequent budget allocation of 23,000 packages was short on high level packages.

LASA CEO Sean Rooney said waiting times also remained grim, with people spending at least 12 months in the queue for all but the lowest levels of care.

“LASA is advocating to minimise the queue and speed up approved services and we need to work with the government to make this happen,” he said in a statement.

“There were over 100,000 older Australians waiting for care when the Royal Commission called for action and there are still over 100,000 waiting today,” aged care spokeswoman Julie Collins said.

Meanwhile the StewartBrown Aged Care Financial Performance Survey for the latest financial year says home care operating results have been declining over the past nine months.

Home care had an overall decrease of $0.05 per client per day compared to 2019, the results, which exclude COVID-19 subsidies and expenses, show.

“Revenue per client day has reduced and, importantly, average staff hours per client have reduced to potentially unstainable levels,” the report says.

“The mix between appropriate staffing and revenue will dictate the ongoing financial performance of the home care sector,” it says.

The survey contains data from 44,647 home care packages across Australia.

Unspent funds are also continuing to go up and now average $8,841 per client – an increase of $1,846 since last year – and more than $1 billion across the sector.

“This continued growth in unspent funds is not sustainable,” the report says.

It says the recently announced change to payment in arrears for services delivered will largely address the problem although the impact on cash flow for providers will have to be monitored.

Providers can opt-in to a system where they can draw down on the unspent funds, instead of receiving their subsidy, until the funds are used up. 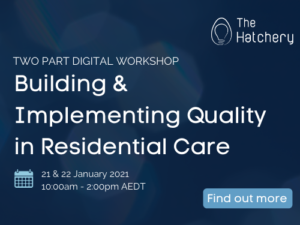